Orchestrator is a new product that orchestrates multiple flows to enable sophisticated business processes to be built without code. 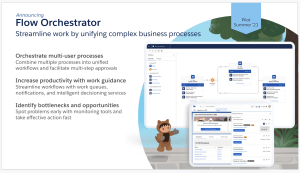 Orchestrator is in Beta and is available to try on all orgs. Note that pricing and licensing has not yet been announced.

(Note that these were shot on a pilot version of Orchestrator so they can be a little misleading. However they’re still useful as a walkthrough)

Currently there are two ways you can launch a flow orchestration: using a record trigger, or auto launch from Apex, But what if I want to be able to launch an orchestration from a button and mimic the good old “Submit for Approval” button?
I looked at alternative ways to start orchestrations, and this is what I found:
1. Launching an orchestration from a URL button was not user friendly as the user was presented with a blank auto launched flow screen and was not redirected back to the record when finished even if the the return URL was part of the button definition. Overall, while this may work, the user experience was not smooth
2. Trying to include the submit flow as an interactive step assigned to the current user, resulted in a warning when saving the flow and an error during execution saying that no assigned user was found

I ended up with the following solution that worked well and gave a smooth user experience:

Here is an illustration of the overall process:

The flow orchestration only has one stage and one step

Here is a short video demonstrating the complete process

Some notes about the flows:

1. The submit flow clears any previous approval status and rejection notes
2. The approval flow only displays rejection notes if the user selects to reject, using a visibility rule
3. In both flows, I’m using a record input variable and this saves having a get records element in the flow as the whole record gets passed in from the button or from the orchestration step

Launching an orchestration from a button opens up a lot of possibilities, please share if you come up with other use cases.

In this demo, you can see Orchestrator’s new beta features, including autolaunched flow support and go-to connectors for routing to a previous stage.