Tap into richer lookups with the Quick Lookup Component

Andy Haas has corrected these issues:
– If the menu is open and the user clicks out of the component the menu will close.
– If parent lookup is cleared the child component(s) will be cleared along with their filters

This started out as the excellent Lightning Lookup control by Opfocus. Later it was enhanced by several members of the Flow community. The chief maintainer is currently Eric Smith.

Object Name: Type the name of the object that you want this control to lookup. You can use custom objects but don’t forget the “__c”

Display which Field: You get to choose which field actually shows up in the combo box and gets searched on. Usually you’ll just want to type “Name” here but you can use any text field

Field Label: This is the label of the control itself

Output which value?: You can separately decide which field should be extracted from the selected object and passed to Flow. For example, you might want to display Name but output Id because Id is easier to work with for some Flow Actions.

There’s also an Output Value attribute that’s used on the Output tab to map your selected value to a Flow variable.

There are several powerful filtering mechanisms built into this component. You probably won’t need to use all of them at the same time.

Filter Using Flow Variables This allows you to specify the name of the specific field you want to filter on. It’s easy but basic.

Filter using a SOQL ‘where’ clause This allows richer filtering. See ‘Where Clause Usage’ below

You can stick two of these components on a screen and have the second component filter on the selection set in the first component. See example 2 below

You can include multiple Parent/Child groupings on a single screen by identifying each Parent component with a unique ID and specifying the related Parent ID for each Child component.

This component exposes the following attributes that can be set in Flow:

Here’s an example of a configured component: 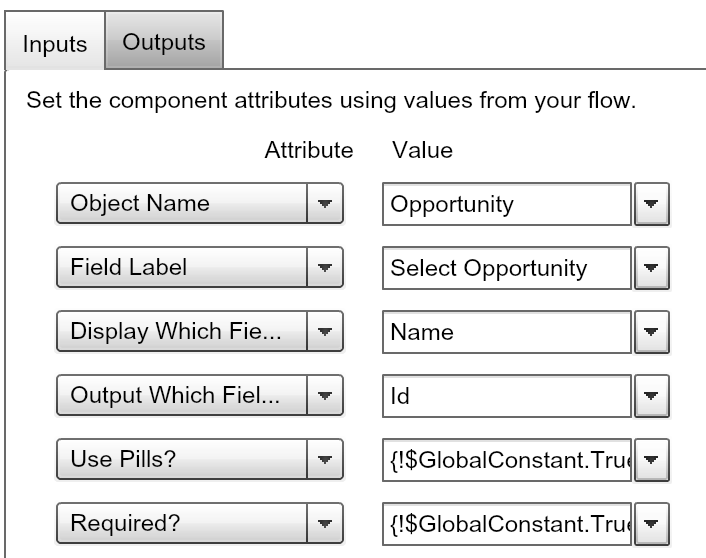 Default Value: (whatever placeholder text you want displayed in the input box – this should match the format of the I2_Display Which Field? parameter)

O1_Output Value: The value to be passed out through the O1_Output Value OUTPUT parameter if no value is selected in the input box (This should match the format of the I4_Output Which Field as Value? paraameter)

Example: Looking up an Account, defaulting to the Account Name of “ACME Company”. Assume the RecordId for ACME Company is stored in the flow variable vDefaultId.

Input is dependent on the fields available for the object selected for “Object Name”.

For example, if you wish to return only accounts of type “Vendor” or “Partner” you could enter the Object Name: “Account” and the where clause: “Type=’Vendor’ or Type=’Partner'”

Example 1: Lookup a Case filtered by an Account where the ID is passed into the flow variable vInputAcctId 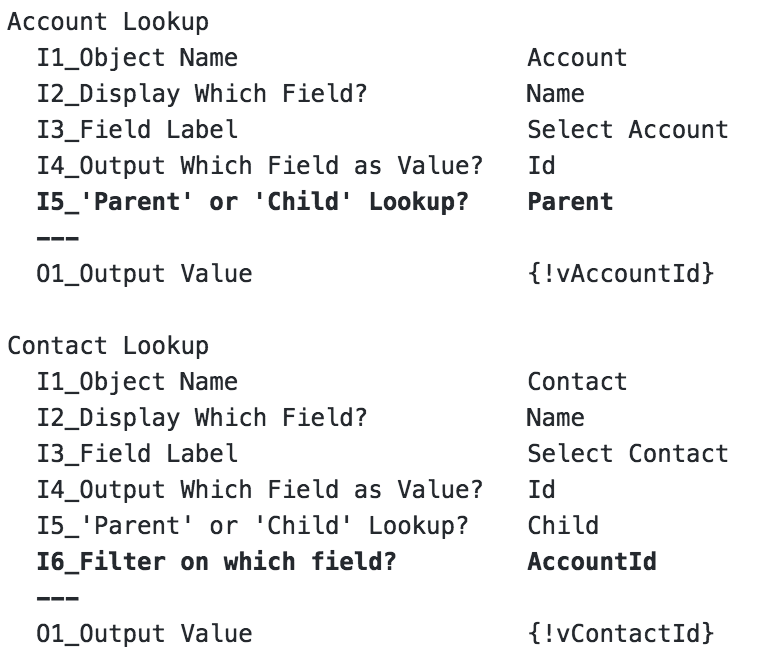 Install this Component Into Your Org

if the menu is open and the user clicks out of the component the menu will close.

I have refactored the lookupFSC component to a new version called Quick Lookup. The new version is built using a Generation 2 unmanaged package and should no longer have any upgrade issues. You can install and use the new version without having to delete or change any currently active flows.

Added new Attribute – I8_Search this Field instead of Display Field

Now supports multi-level Parent/Child lookups.  A lookup can now be both a Child lookup and a Parent lookup.

10/29/19 – With the new release of Winter ’20, you will need to make sure you select the “Manually assign variables (advanced)” checkbox and set your output parameters to variable resources you have created in your flow.

6/15 Another fix for the jquery issue. also fixed the default value for I4_Output Which Field as Value?

The flow screen image at the top of this page includes 5 lookup components.  The Primary Contact(2) is a child of the Bill To Account(1) and the Delivery Contact(4) and Service Address(5) are children of the Deliver To Account(3).