I’m very pleased to again be able to share information about imminent new Flow functionality! This is a particularly strong release, possibly a match for the already-legendary Winter ’20 release. Preview Orgs can be obtained to try out this functionality.

Flow Builder now provides a canvas option called Autolayout that automatically connects elements to each other and handles layout. This simplifies the user experience and makes flow construction more consistent. 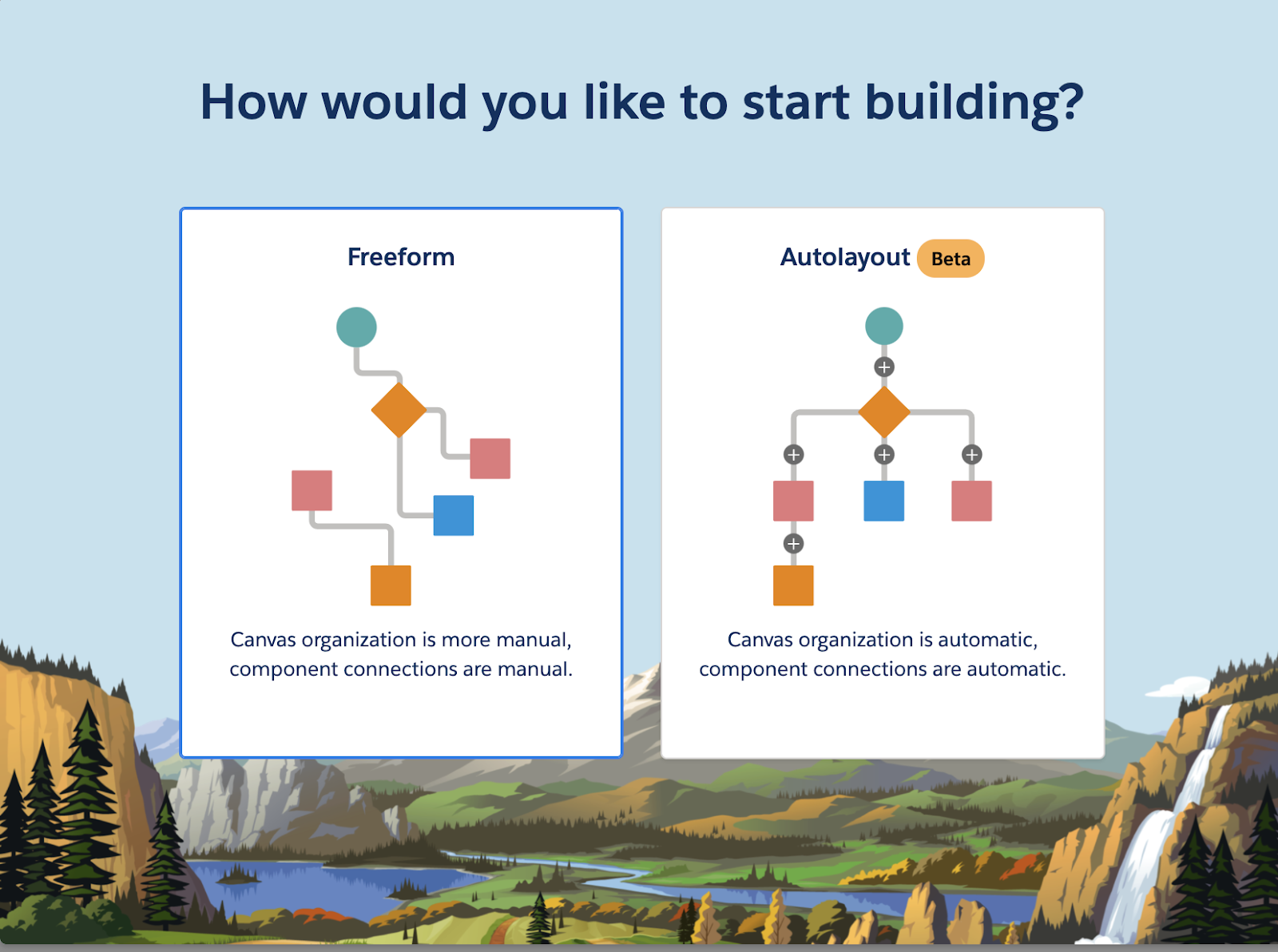 Use the new Autolayout toggle on the Flow Builder header to switch between Autolayout and the traditional Open Canvas mode:

When changing to Autolayout mode, if the current was created in Open Canvas mode, its positions will be lost, even if the user immediately changes back. We therefore recommend that users save before activating autolayout mode if changes are intended. However, if the flow is changed to autolayout mode and then closed without any saves, the original positions will still be present in the latest version.

We’re going to be very interested in feedback on the Autolayout experience because we don’t want to indefinitely maintain both modes and we think Autolayout is the future.

Universal ‘OR’ and ‘Custom Condition Logic’

You can now use actual OR logic. Oh, and Custom Condition Logic too. Everywhere in Flow. The ‘smart money’ on the Automation teams thinks this might be this release’s most popular new feature, despite the tough competition.

Enable this pilot to see a new component in Screen Builder: Section. Each section can be divided into up to 4 columns. Customers can use Sections to create multi-column layouts on their screens, and then embed whatever screen components they like in those components.

Information will be posted in the Automation Trailblazer community (and here) when the pilot becomes available.

This enables you to do a debug run as a specified user. Great for testing.

This can be controlled at the org level:

A number of debugging improvements have been rolled out for autolaunched flows:

Note the reorganized Debug Log, the improved header, and, most prominently, the visual path indicators.

Some parts of Flow Builder have been enhanced to feature pills, which allow friendly labels to be used in place of merge field syntax.

Click on a pill to reveal its underlying value. Pills do not change existing values in any way. They simply add a label.

For example $GlobalConstant.True will appear as ‘True’

We’ll be expanding the range of pills support in the next release.

Error messages now provide, when available, links to the element that caused the error, allowing the property editor to be quickly opened.

Insider tip: one of the reasons we did this was to pave the way for the conversion of modal property editors into panel property editors that allow you to create an element and leave it partly unconfigured without triggering error messages. The validation moves to Save-time, which makes it important to help users ‘get back’ to the source of errors. This in turn is a prerequisite for true Draft Mode.

A number of Process Builder capabilities comes to Flow in this release. Now, when you create a record-update triggered flow, you have the option to select entry criteria to narrow down which records you’re automating in the first place. The Process Builder choice to only run when the criteria has just changed to meet the requirements is also now available:

Record Update Trigger Improvements: ‘Only When Record Has Just Changed’

As seen above, the ‘When to Run the Flow for Updated Records allows for tighter control of execution.

It’s hard to write something catchy about field traversal. It’s just one of those things that you don’t think about until you absolutely must have it. Now available in Record-Change Triggers.

External Services, which I think of as ‘API Action Builder’, has been enhanced to support OAS 3.0 and schemas up to 1 million characters in size. The biggest impact of this is that, for the first time, it’s possible to use External Services to bulk import the ‘schemas’ (basically a big text file describing APIs that you can call) of public web services, generating dozens of Flow Actions that directly access those web services’ APIS.

Not all web service schemas can be imported in Winter ’21. Some are longer than the current 1 million character limit. Others produce errors when you try to ingest them because of functional gaps that still need to be addressed. However, as you can see from the image above, the list of services that you can successfully ingest includes Jira, Dropbox, Instagram, Twitter, Mailchimp, eBay, and Walmart, GoToMeeting, Trello, and Medium. Here are some examples of the actions that become available for use in flows:

Note that this currently planned as a closed pilot, meaning you need to request access via your company’s Account Executive.

Global variables, previously only available in Flow via Formulas, are now accessible anywhere you want to reference a field.

For enterprises, this is the sleeper feature with the big impact.

Traditionally, changes that can cause breaking disruption have been deployed as CRUC’s that have to be carefully regression tested:

For a variety of reasons, this is burdensome, so starting with this release, the Flow engine will be versioned with the API version. Features that are deemed to have disruptive impact get versioned, which means they only are applied automatically to new flows. (Importantly, we expect that most flow enhancements will not have any breaking impact and will not need to be versioned.)

So essentially, you will no longer need to apply CRUC’s to your mature flows.

So, to reiterate, the above four bug fix/improvements will only automatically apply to Flows that use version 50 or higher. All flows that were last saved on a Summer ’20 or earlier org will be assigned version 49.

This capability is used to deliver screen components like this Datatable extension:

Invocable Actions (aka Flow Actions) already have this functionality at GA level.

Agents are now empowered with contextual, event-based recommendations in the Next Best Action and the Actions & Recommendation components based on information in Voice Call records and call transcripts. Events for call state changes, such as start call, end call, mute, hold, etc.,can be used to build event-driven solutions.

APIs in the Service Cloud Voice Toolkit can be used to push context-sensitive recommendations based on field values in the call record and keywords in the call transcript.

Next Best Action is invoked with key:value pairs in the Lightning Message Service message payload. The value given to a particular key can be retrieved in the Recommendation Strategy using $Request.key in the filter element as follows
$Request.key != ” && CONTAINS(Name, $Request.key)

Next Best Action has been certified compliant with HIPAA (the Health Insurance Portability and Accountability Act of 1996), certifies that NBA meets the strict standards for protection of sensitive customer information.

ERB is natively integrated with Einstein Next Best Action to surface these AI-driven recommendations as next best actions.

Have questions? Since these are official features, we suggest you post questions to the Automation Trailblazer community.

We're always looking for people who want to get involved! You don't have to be a Flow expert as there are a variety of ways you can volunteer. Learn more here